Spirorbis – A memoir by Peter Vine.

Spirorbis, a fascinating and compelling book will be launched on the 20th September, 2020, at 6 pm and with the tremendous generosity of the author 50% of proceeds will go to the Dublin Neurological Institute.

Peter Vine travelled extensively and worked in over thirty countries encountering some of the world’s most intriguing cultures and places. From deep-sea diving in the South Pacific islands to book publishing and film production in the deserts of the United Arab Emirates, fish farming in Greece and Ireland and conducting research on the Spirorbis worm in waters from New Zealand to the Red Sea, Vine is a sympathetic observer and participant of life in the widely varying and rich mileaux in which he has lived and worked.

Spirorbis tells stories from Vine’s life rather than the story of his life – stories of adventure, of exploration, of romance, of risk-taking, and of narrow escapes.

Why Spirorbis? Spirorbids are tiny spiral tube worms living in almost every coastal marine habitat on our planet. Engaged in a worldwide study of their biology and zoogeography, Peter Vine found that they gave him an unparalleled opportunity for travel and adventure. It also led to the naming of a new genus after him, Vinearia, a distinction not granted to many.

50% of proceeds from sales of the hardback version of Spirorbis and 100% of proceeds from the digital version sales will go to support the work of The Dublin Neurological Institute at the Mater Hospital and the book was launched by Peter’s long-time friend and fellow-adventurer, Doug Allan, 20th September, 2020.

A recording of the public interview of Peter Vine and Doug Allan by journalist Lorna Siggins including Prof. Tim Lynch joining at the end of the interview (57 minutes) can be listened to on this media player: 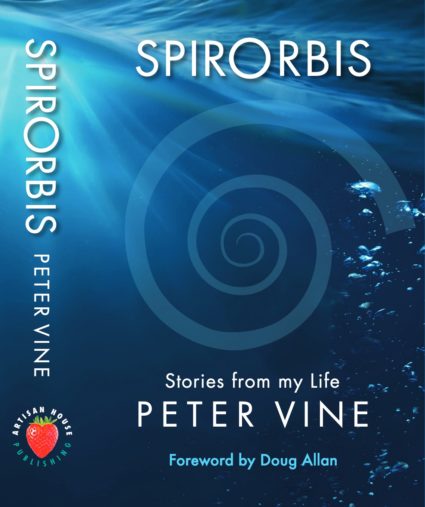 Alternately you can visit the link below to hear the interview

In welcoming this launch and its associated support for the institute Prof. Tim Lynch said “Peter Vine is a remarkable man – curious, energetic and with a persistence bordering on stubbornness to live life to the full. Spirorbis is a riveting inspirational read.”

You can also purchase the electronic (Kindle) version of the book on Amazon at this link.

The book can also be found on US Amazon.com website here: www.amazon.com/author/petervine

You can download the full press release for the publication and launch of Spirorbis here: